Government imposed eco-subsidies are said to have contributed to a recent spate of energy price hikes. But are these ‘green taxes’ really to blame? Jess McCabe investigates

Putting the heating on has just become much more expensive. Let alone keeping the lights on, TV humming, kettle boiling and the whole family’s phones charged. At the time of going to press, four out of the six main energy suppliers had announced price rises, with npower leading the way with a 10.4 per cent inflation-busting rise from 1 December. And this is on top of price rises that have driven average annual dual-fuel bills from £610 in 2004 to £1,130 in 2012, according to the Committee on Climate Change, the independent, government advisor.

Matthew Spencer’s career as an environmental campaigner has taken him to Central America’s cloud forests and back. Now, as director of think tank Green Alliance, it’s his job to put pressure on Westminster to make sustainable decisions. He tells Jess McCabe why, despite a tough economic climate, he is optimistic

Matthew Spencer does not at first glance look like an unrepentant enthusiast. Brow furrowed, a serious expression on his face, the director of think tank Green Alliance only outs himself as unremittingly buoyant when he opens his mouth.

‘Our job is to keep this sense of transition [to a low-carbon economy] alive and well, with good ideas and debate,’ the 49-year-old says eagerly, explaining Green Alliance’s ethos as the main think tank seeking to influence Westminster politics on environmental issues. ‘So that’s one way we judge our success. How fresh and interesting is it? Are there new voices coming in?’

Walking down noisy Buckingham Palace Road in central London to meet Mr Spencer, at first I miss Green Alliance’s unassuming front door, crammed between a café and a restaurant. A glance into the offices suggests semi-controlled chaos, as stacks of papers threaten to overwhelm desks.

But there is hardly any time to notice as I am quickly bustled into the think tank’s meeting room, and straight into a picture of studied calm – white, minimalist walls decorated with glassy corporate awards and the framed covers of reports published by the organisation, the carpets are prominently labelled as being made from recycled materials. It’s like the proverbial duck: on the surface, calm nonchalance, just beneath the surface, frantic paddling. Mr Spencer finally emerges wearing khaki chinos paired with formal brogues, the tumbled impression continuing.

When Mr Spencer got the job in 2010, the coalition was fresh in post and David Cameron was hugging huskies and there was an unprecedented cross-bench agreement on the urgency of tackling climate change. It might have seemed like one of the easiest lobbying jobs in Westminster.

‘The last thing you want to do if you want to deal with the cost of living is to remove, to undercut the pot of money that’s available to lag roofs and improve the building fabric of our older buildings,’ he says, unimpressed. ‘You have to help the poorest and those in the leakiest homes.’

Tanzania is expected to finalize a new constitution by April next year and women—who carry out 60 percent of the country’s agricultural labor— will be anxiously watching to see if their land rights are strengthened.

IRINGA, Tanzania (WOMENSENEWS)—Rozalia Msaudzi, 68, quietly explains what her life is like in her small village, near Iringa, in the southern highlands of Tanzania. She maintains a collected expression as she relates the hardship of maize farming, the death of her husband in 1996 and the number of children who are still alive.

But her voice starts to rise and she gestures emphatically when one subject comes up: the rights of women in this overwhelmingly agricultural country to own the small plots of land that they farm.

“Women should be given the right to own the land because many women around this village are being oppressed by their husbands,” Msaudzi says emphatically, through a Swahili translator, as we sit on the low, foam pads that serve as her sofa in this modest, mud-brick home. “What they get from their farm, they just use the money for their own and not for the whole family.”

Of the five acres of land that Msaudzi’s husband left when he died, she now has access to one acre, where she grows maize. Title to the other four acres has passed to one of her five living children.

As the country now works to rewrite its constitution, strengthening women’s land rights is a top priority for feminist groups, which have been lobbying a 30-member Constitutional Review Commission expected to issue a final report shortly, with a referendum before the next election.

Women’s right to own land in this east African country became national policy in the mid-1990s and then was enacted in 1999, when the Land Act and the Village Land Act were passed. But customary laws —which usually stipulate that land be passed down through the male line—still hold sway through caveats in national legislation that give them precedence.

“We have laws which are very contradictory,” said Mary Rusimbi, executive director of Women Fund Tanzania, in a phone interview from Dar es Salaam.

Indeed, the Village Land Act gave women equal rights and access to land as men, for example, stating married couple should be joint owners of any land. In order to take out a mortgage or sell land owned by a married couple, both spouses need to give consent. The legislation also gave women inheritance rights. However, the legislation also allowed “customary law” or religious law to take precedence.

In some cases, customary law expects widows to return to their parents’ family, losing all rights and access to the land they have worked. In other cases they may be granted access to the family land only until any children reach adulthood.

In the vast majority of cases, Rusimbi says, these customary laws are applied, even if they discriminate against women.

Activists hope that restating women’s land rights in the constitution, without caveats about customary law, and setting minimum standards for inheritance by spouses could help solve the problem.

Three women from Iringa, Tanzania, get an agricultural lesson.

“Women as widows and daughters need an independent right to inherit the share of their deceased husband or father’s property, so they can be able to freely lead peaceful lives and look after their children,” argues the Tanzania Women Lawyers Association, a group of lawyers and paralegals who often represent women in property disputes, in a position paper on the new constitution.

The paper cites cases during property disputes of sexual harassment, property grabbing, women being prevented from remarrying and infringement of widows’ privacy and dignity, as their choice to remarry is discussed among their deceased husbands’ relatives. Interviews with orphans living around Lake Victoria found 45 percent living alone on property left by deceased parents, and linked unfair inheritance practices to children ending up homeless and young girls getting involved in prostitution.

Women carry out 60 percent of agricultural labor in the country, according to government estimates. But women without title to their own land may struggle to take out loans, according to a report by Tanzania Country Level Knowledge Network, which concluded: “The survival and sustenance of agriculture and rural development in Tanzania, as well as in many sub-Saharan Africa countries, rest squarely on the rural women.”

Tanzania‘s Agriculture Minister Christopher Chiza says the government is doing what it can to help female farmers. Speaking from behind a massive stack of official papers that tower in his in-tray, Chiza says: “What we’re trying to do is encourage women to access land, to access loans and as much as possible we are giving them opportunities.”

But when asked if he knows how much land is owned by women, the minister laughs. “No. That is a very difficult question for me. I wouldn’t know,” he exclaims, before turning to one of his staff to ask: “Do you know?” She does not.

“It might be a very difficult question,” he concedes, still amused. “There are women who own land for some reason, but in a family, for example, in my family, usually if there is land, that land belongs to Chiza. Chiza means myself and my wife. So if it belongs to me, there wouldn’t be any reason to say Mrs. Chiza would also own one hectare, unless we are divorced. If you are a family, we still own that jointly. But of course there are cases where women own land. But to answer your question I can’t tell you that so many hectares are owned by so many women.”

A reality television show called “Maisha Plus,” Tanzania’s version of “The Simple Life,” provides an unlikely alternate source of this information. In 2012, the TV show partnered with the charity Oxfam to run a competition for female farmers to spend two weeks living in its televised village and receive agricultural training.

From detailed application forms filled in by 4,505 female farmers from 18 regions, the charity extrapolated an unprecedented snapshot of life for women in rural Tanzania. Only 5 percent own land, for example. Forty-four percent farm on land owned by their husbands; 35 percent work on family-owned land. Nine percent of women rent a plot of land. Almost 2-in-3 of the women named denying women the right to land as the most abusive form of gender violence.

To understand why all this is so, one only has to speak to one of Msaudzi’s male neighbors.

Alfred Mofuga, at 63 years old, standing confidently in his yard, a pen tucked into his suit jacket, has four wives. With a shake of his head and a smile, he explains he is not in favor of women owning or inheriting plots of land. “It’s not good, for truth. It’s not good. When a man or husband owns the land, it entitles the whole [family to that] land.” He shakes his head.

Back in the agriculture minister’s office, Chiza is keen to stress his wife’s rights over their joint land. But then he describes what would happen if he died. “If I have land and if something happens to me, for example, my wife stays with the family,” he says. “We have our customary laws and regulations of making dividends to members of the family.”

Jess McCabe was in Tanzania as part of a fellowship from the International Reporting Project (IRP), an independent journalism program based in Washington, D.C.

TOUCH this image: Another front page

This morning I met Abraham: 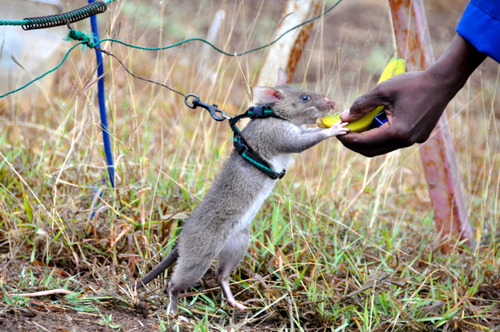 He has just detected an anti-tank mine. As soon as he sniffs TNT, one of his trainers sets off a clicker. When the rat hears the sound, he scurries over to be hand fed a miniature banana.

This five-month old African Giant Pouched Rat, so named for its chubby…

I visit a tech space in Dar es Salaam, and muse over the lack of women participating. More at The F-Word.

Welfare reform has placed a heavy burden on social landlords’ resources but results from an exclusive new survey reveal that many organisations are turning to technology to lighten the load. Jess McCabe reports

Luddite machine breakers in the 19th century risked everything when they destroyed the early labour-saving technology of the industrial age. They were losing their jobs to machines, leaving them in destitution. But today’s housing professionals aren’t too worried about being replaced by a robot or an iPad app.

Instead, an exclusive survey by Inside Housing and outsourcing firm Capita completed by 485 respondents reveals that housing professionals are overwhelmingly hopeful about the digital revolution, and the promise it holds to help them cope with welfare reforms. Many of these reforms, such as the bedroom tax which affects tenants with spare rooms, and universal credit, which combines many benefits – including housing benefit – into a single monthly payment direct to claimants, are expected to hit social landlords hard, as tenants struggle to pay their rent.