Latest for Inside Housing: A fair enough deal?

So Labour’s ‘fairer deal’ for private rents has been unveiled today. The proposals, such a ban on ‘rip off’ letting agent fees, and a national register of landlords, are aimed squared at the 9m people renting in the UK, many of them unhappily. Labour would make a three-year tenancy agreement the ‘norm’, and put a ‘ceiling’ on excessive rent increases during those three years, we learnt.

Interestingly, Labour’s announcement comes only a couple of days after thousands of Londoners marched on City Hall in one of the biggest housing-related demos that the capital has seen for a very long time. And I joined them.

With two separate marches converging outside Boris Johnson’s offices on the banks of the Thames, the March for Homes on Saturday was an audible and visible demonstration that many people living in London are fed up of not being able to afford somewhere to live.

This raises an obvious question: will Labour’s plans resonate with the March for Homes protesters? 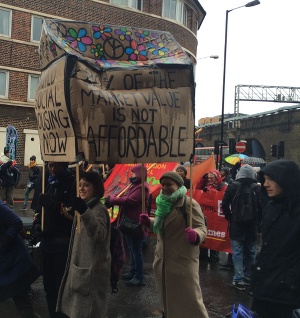 I accidentally left the March for Homes too early. It was pouring with rain, and the ink was running off the page as I tried to interview some of the protesters. Some of the placards were visibly wilting. One cardboard house, carried by four protesters from Elephant & Castle to City Hall looked on the verge of collapse. It was just possible to read the slogan still: ‘80% of market rent is not affordable.’

I thought everyone was about to go home. At least some participants were angry enough not to have their spirits flattened by a bit of weather. As VICE reported, some protesters left the march and went to occupy one of the empty blocks on the Aylesbury estate in Elephant, while others tried to occupy extremely expensive flats being built near Tower Bridge. At time of writing, the occupation of Aylesbury is still going on.

Will Labour’s proposals be enough to defuse this anger? Some of what the party is proposing would undoubtedly help Londoners and renters elsewhere in the country coping with high rents, unsettled tenancies and cold housing.

But I’m not convinced it goes far enough to deal with the real touchpaper issues that drove thousands onto the streets.

One woman in her 60s I spoke to from West Hendon, has lived in a rented council house for the last 34 years, and fears she might have to move. Even if not, she fears the break-up of her community.

I spoke to Deborah Mason, a 52-year-old artist who was carrying a beautiful handmade sign from an artists’ collective against austerity. She told me that she was lucky to buy a shared ownership home in south east London in the late 1990s, which means she can now afford to live in London on her salary of £12,000 a year. That would be impossible for her to afford now, she pointed out.

The march on Saturday was made up of two columns, which converged on City Hall from two parts of the capital.

One march started in Shoreditch in east London, which has been experiencing waves of gentrification ever since the 1980s when it provided cheap studio and living space for the Young British Artists.

The second started in Elephant & Castle, which is teetering on the start of ‘Shoreditchification’. Plans for regeneration of the area started with grand plans to knock down the Aylesbury estate and replace them with new developments.

Local residents have responded with increasing anger in the last few years, as the social and affordable housing part of this plan has been scaled back, with more room left for luxury developments for the wealthy.

One of the banners I spotted showed a pink elephant, collapsed on the ground as it unsuccessfully faced off with a JCB. I spoke to Anton, in his 20s, who was holding one end of this banner. Asked why he was there, the answer was he’s against inequality and social cleansing.

Activist groups also made their presence felt on the march – I spoke to Albane, one of the activists from Feminist Fightback (a socialist feminist group) who was holding one end of a bright red banner which read ‘housing is a feminist issue’. The housing crisis is ‘linked to domestic violence’ she pointed out (and anyone who has read my colleague Heather Spurr’s excellent expose on the rising use of B&Bs to house women fleeing domestic violence will understand that).

‘It’s obvious that we have to do something about what’s happening,’ she added, ‘It’s a massive change for London.’

Labour’s policies are probably not as radical as (at least some of) the participants in the March for Homes would like.

One of the responses to Labour’s proposal has come from the Residential Landlords Association (RLA). The RLA argues that the proposals for rent controls will leave tenants worse off, saying that 75% of its members froze or reduced their rents in 2014.

‘State-controlled rents would choke off supply, increase rents and reduce quality,’ was the message from Alan Ward, chair of the RLA. It is obviously not the view of those marchers on the weekend holding massive banners calling for ‘rent controls now’.

Of course, the proposals today address the private rented sector and therefore don’t touch on many of the issues that those in the social housing sector are most frustrated by, echoed by some of the marchers at the weekend: what ‘affordable’ housing really is. Equally, they do not and weren’t meant to address directly the issue of communities breaking up.

That said, if these policies were adopted they might well make a dent in the affordability crisis that has driven many of this varied group of Londoners onto the streets.