What’s in a name? (Inside Housing latest)

Staff at a small housing association in High Wycombe write their own job descriptions and create their own titles. Jess McCabe investigates why and what difference it has made 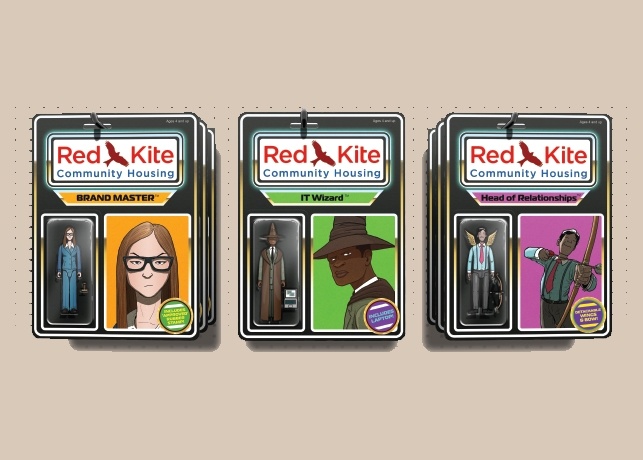 Sue Fryer rolls her chair towards me and leans in. ‘This is very liberating,’ she says, wide-eyed with enthusiasm.

Her zeal is both infectious and slightly intimidating.

‘To be able to be given the freedom to write your own dream job is just amazing,’ she continues.

Ms Fryer, like all the 140 staff at Red Kite Community Housing, has in the last year re-written her job description and created her own job title.

It’s not surprising that Ms Fryer is pleased. For ‘20 years plus’, she worked at Wycombe District Council, most recently as a personal assistant to the head of housing, before the creation of stock transfer housing association Red Kite three years ago. She transferred along with the association’s 6,500 homes.

About a year after the creation of Red Kite, the association decided to restructure. It threw out the rule book for how housing associations should be organised, and ‘slimmed down’ its executive team. Traditional housing functions were re-organised. The existing hierarchy was scrapped, to be replaced with a relatively flat structure, which it describes in terms of ‘hubs’, ‘pods’ and ‘stems’. 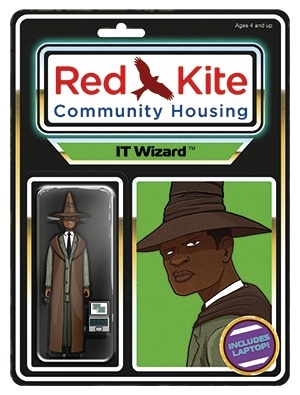 Ms Fryer was offered the chance to help design the restructure, and her own role in the organisation. ‘Instantly, I wanted to sit at the table,’ she says. The process took around four to six months, and in Ms Fryer’s case, led to her moving from being PA to the whole executive team (a huge amount of work), to ‘business support manager’ with a team working under her.

Describing the difference between working for the council and Red Kite, it’s hard to see how Ms Fryer could be any more effusive. ‘It makes you feel alive,’ she says.

Red Kite’s offices are located in a deceptively bland business park on the outskirts of High Wycombe. But inside, a mini-revolution has taken place in the last 18 months.

Has the chief executive, Trevor Morrow, got carried away after one too many TED presentations? Or is the rest of the social housing sector losing out on their staff’s potential by sticking to old ways of doing things?

‘We set up a functional review, looking at developing a model that was completely different. What was very obvious was we were based around professions, and quite stuffy professions. That’s not really how customers see it. We needed to rebalance it all around a customer’s point of view,’ says Alan Keers, director of operations. ‘We started from a blank piece of paper. If you were reinventing social housing in the 21st century, how would you do it?’

It’s easy to trace a lineage for many of Red Kite’s innovations back to Silicon Valley.

Every Wednesday morning, staff get time to work on projects outside their usual jobs. (Until 2013, Google allowed staff to spend 20% of their time on side projects.)


Writing your own job title or job description is relatively common in other industries. And it doesn’t always come packaged as part of a reinvention of the entire organisation. Nor does it always have to be a ‘weird’ job title – although Inside Housing has encountered many ‘gurus’, ‘ambassadors’ and even a ‘professional opportunist’.

Take the example of Zohra Moosa. In a previous job, she worked for the gender equality charity The Fawcett Society. She got the chance to decide her own job title and job description when she was promoted to senior race and gender advisor. ‘I thought it was great,’ she says, ‘I got to represent my work externally the way I wanted.’

Jon Wheatley is a communications and events officer in higher education. He’s in the process of redefining his job title and description. He says: ‘While it hasn’t actually changed the work I do, it has formalised it. It’s also reassured me that the work I do is valued and important to the organisation.’


A recent session was less Googleplex, more Blue Peter. Staff were encouraged to make clay models of their hopes for their job. Zosia Katnik, whose chosen job title is ‘brand master’ (yes, she does get jokes about Grandmaster Flash), shows me her model, a collection of rounded people around a Red Kite sign. It represents her hopes for people to feel good about the Red Kite brand.

Perched on some of the desks are trees made from tin foil, also made during one of the ‘creative gaps’. Hanging from the branches are colourful leaves, with such corporate-genomic phrases on them as ‘personalities, not just people’, ‘brand’ and ‘commitment’.

Redefining of job titles and descriptions also took place during these free sessions, with workshops for different teams of staff, starting in February last year. Sarah Mei Ying North, programme and change manager, set up these workshops with Amy Gill, project coordinator. However, staff weren’t allowed complete freedom to write their job descriptions and titles: Ms Gill created laminated word cards which staff were meant to fit into a template. Some examples include ‘maximise’, ‘promote’, ‘reduce’ and ‘carry out’.

‘We were tasked with making it fun and different,’ says Ms Gill.

Ms Mei Ying North adds: ‘It helped the teams to form their own internal debates about what was important in the role and what were the core activities that needed to be delivered.’

The aim was to reorganise what needed to be done, removing barriers and unnecessary work – in effect, designing the job descriptions from the ground up. It was also meant to ensure staff were empowered and energised in the workplace. 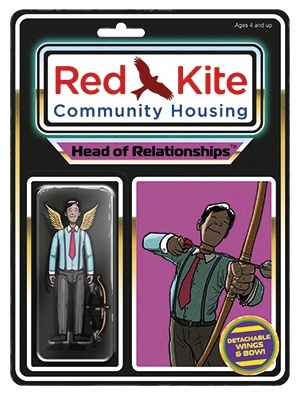 After the workshop, the managers took ‘a quick look’, she explains, and the draft was put on the intranet to allow people to feed into the discussion later.

Red Kite made clear to its staff that it wasn’t looking to reduce the number of workers during the restructure, and they weren’t going to write themselves out of a job. Some were reluctant at first, but everyone I speak to insists that overall the response has been good.

Adam Rigg’s example shows the process is not totally freewheeling. He used to work for the police, then the council in anti-social behaviour, before transferring to Red Kite doing the same work. Over time, his skills and interest in new media and more creative pursuits became clear (Mr Rigg is also a musician, who has recently toned down his rock band – it now has more of a folk focus. ‘Calm down, Adam. You can’t rock out wearing leather and denim anymore,’ he says).

During the restructure, the role Mr Rigg is currently in was created – new media and channel specialist. At one point, the idea of calling Mr Rigg ‘techy guru’ was floated. But he says: ‘I didn’t get much say in the title, to be fair. I think Matt [his boss] had a good idea what it should be.’

Red Kite prides itself on spotting talent – it is hiring a ‘talent spotter’, and will create jobs for staff that it believes are a good fit, even if there isn’t an immediate job opening for them.

It also spots talent in its own workforce.

Non-hierarchical structures have been tried before in housing. Wendy Davis, an architect, worked for Solon Clapham, a collectively-run housing association in Clapham, from 1978 to 1982. ‘It was great being able to take tenants to four or five already converted properties and letting them decide on how they wanted their own flats to be designed,’ she recalls.

‘In those days, we really did believe “the times they are a changing”. There were lots of collectives and co-operatives trying to create a new model of working where everyone’s ideas were valued, everyone got paid the same and no-one exploited anyone else. It was certainly a lot easier to get things done than in the local authority post I occupied subsequently,’ she adds. 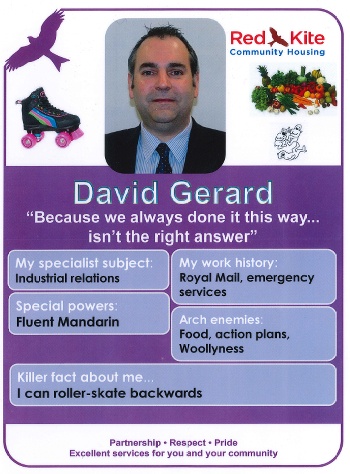 Red Kite is in the process of creating a ‘Top Trumps’ deck, setting out the skills and ‘special powers’ of all staff members. David Gerard, head of people, for example, has ‘industrial relations’ as his specialist subject. The card is decorated with a rollerskate because the ‘killer fact’ about him listed on the card is, ‘I can rollerskate backwards’.

‘If you give people the freedom to make decisions that traditionally they’ve had made for them, you have to accept you sometimes won’t agree with those decisions,’ says Mr Gerard.

‘For example, one of my team wanted to be called a minion. She’s a big fan [of the cartoon film], and thought calling herself a minion would be great, which is a bit of fun but we couldn’t have staff calling themselves minions because it might have some negative impacts as well.’ In the end, the member of staff ended up with the title ‘people support coordinator’. More prosaic, true, but perhaps also less ridiculous.

‘We wanted to have “IT wizard”, but again, people outside of here will go “really?”,’ points out Ms Katnik. ‘David [Gerard] wanted to be called “head of happiness”. It’s cool, but it’s a bit out-there, isn’t it?’

‘We [discussed it but] didn’t have a talent magnet. We thought that might be inappropriate,’ Mr Gerard adds. 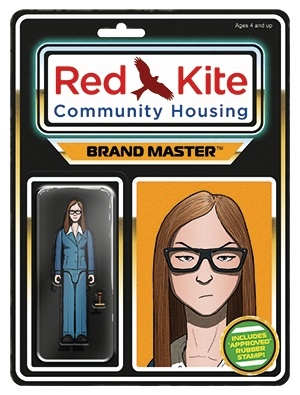 John Gray, secretary of the housing association branch of the trade union Unison, is circumspect. Job descriptions, he points out, are an important legal document. ‘I’m being a bit of a sourpuss,’ he admits. ‘You want to empower people and employees should be at the centre of consultations [over job descriptions].’

Still, it is a serious matter that Mr Gray believes should be carried out with specialist advice, ideally from both lawyers and union representatives. ‘I have seen real problems where there have been poorly defined job descriptions,’ he adds. ‘People are paid very different amounts of money for doing very similar jobs.’

Red Kite says it is ‘non-hierarchical’, but as the association has a chief executive, managers and a clear chain of command, it doesn’t take this too literally.

Most of the airy, colourful office is open plan, and decorated with cheerful cartoons (drawn by one of its own staff members). Senior staff still have their own offices.

But the association is trying to close the cultural and psychological gap between managers and staff.

Mr Morrow, the chief executive, is known to have lunch with junior staff, for example.

Ms Fryer explains how this works. ‘Yeah, sometimes it’s uncomfortable – Trevor will plonk himself down. But we’re getting over that uncomfortableness. You can say what you want to the chief exec, within reason.’

See this feature on the Inside Housing website here

← The story of the house built in a day (Inside Housing latest)
In These Cases of Abuse, Her Money Was No Defense (Women’s eNews latest) →