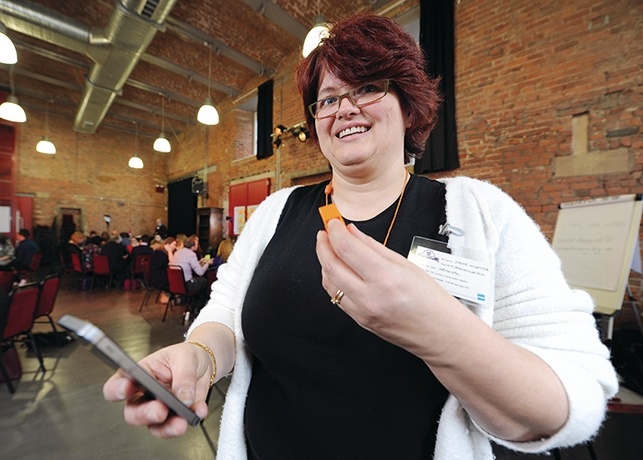 Jayne Hilditch isn’t conventional. So, of course, it’s impossible to conduct a conventional interview with her.

Inside Housing is following the social media-savvy corporate services director for Thames Valley Housing, as she wanders about a converted mill in Manchester. She is here to facilitate the first ‘housing camp’  in the north-west.

With a bright orange whistle slung around her neck to referee the camp, Ms Hilditch grins constantly, and laughs frequently. She pops up when she’s needed to explain proceedings to roughly 60 eager-beaver housing professionals. They have opted to spend their Saturday at this ‘unconference’ – a deconstruction of the conference format that puts the agenda in the hands of participants.

‘We’ve got some very modern suits here today – it’s brilliant they come along and are up for engaging in a slightly wacky way,’ she says, finishing with a guffaw.

This unconference has been organised by the Chartered Institute of Housing, but it is a format that Ms Hilditch borrowed from the tech scene and introduced to the housing sector two years ago. The day starts with no programme and no agenda. Participants, ranging from chief executives to housing officers, stand up and pitch ideas for sessions and, if enough of the people in the room put their hands up in support, it gets added to the schedule.

Your reporter is not immune – participants at the housing camp take sneaky shots of me interviewing Ms Hilditch and post them on Twitter. 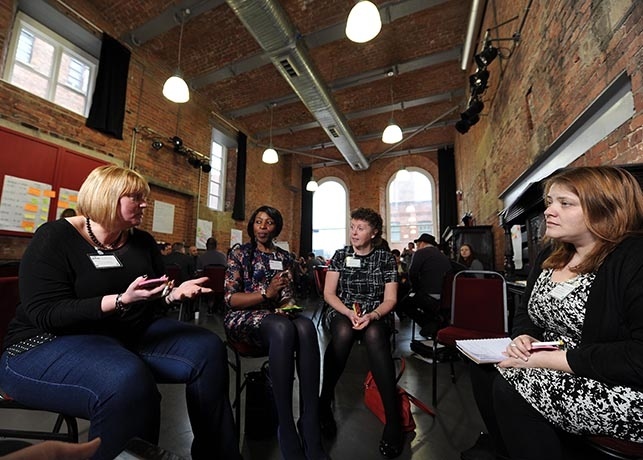 Participants are deep in discussion at housing camp

Meanwhile, the housing Twitterati sends questions to her via Twitter and Instagram (see box). @jaynehilditch is well known for her outspoken opinions on technology in housing, and weighing in on her other passions, such as knitting, skiing and motorbiking (’I am a bit of an adreneline junkie so I really like skiing fast,’ she says).

“There was one computer that could send external messages.”

All of this speaks volumes about Ms Hilditch: respected leader on digital services in the housing sector; nonconformist; social media butterfly.

Which makes it surprising that Ms Hilditch began her career as an accountant.

After graduating with an economics degree in 1990 from Warwick University, Ms Hilditch explains: ‘It felt like a structured training programme that led to a qualification would be a good thing to do with my time while I worked out what I wanted to do. [Since then] I have been largely experimenting with things until I found the internet, and building digital things, and that’s definitely what I’m most happy and destined to do.’

After qualifying, Ms Hilditch got a job at a firm of chartered accountants but, she says with another of her trademark big laughs, ‘I was bored sh*tless!’

A job came up as a management accountant at Winchester District Housing Association in 1993. ‘I thought a social purpose organisation sounded interesting,’ she recalls. Even though IT wasn’t part of her job yet, Ms Hilditch introduced email to Winchester. ‘It was just one email address for the whole of Winchester District Housing Association, as it was then. There was one computer that could send external messages,’ she says. 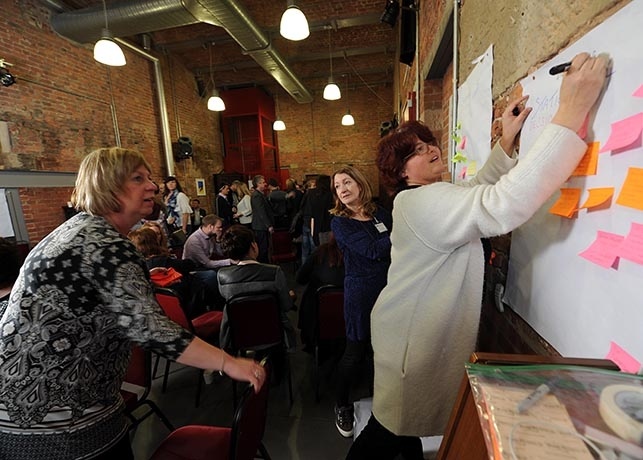 And for most of the following 22 years, she has worked in housing, in roles that have become more and more focused on technology.

Next she worked at Servite Houses (the housing association now known as Viridian), managing finance for its care service.

“Use the computer to do high volume, low emotion transactions, and use the fleshy human beings, the sentient human beings, to do things that need judgement and empathy.”

For a short period, Ms Hilditch went to the Commission for Architecture and the Built Environment. ‘I soon realised that working in government or for government wasn’t going to be for me – I found Whitehall a bit stuffy,’ she explains.

Then Kate Davies came to Notting Hill Housing Trust as a new chief executive in 2004, and was looking for a new team. She had worked with Ms Hilditch at Servite and brought her on as group corporate services director. ‘She took on some really big projects and showed she could deliver under almost any circumstances,’ Ms Davies says.

Next, Ms Hilditch took another change in direction, going into the private sector as chief operating officer for a public sector online jobs board. The timing was unfortunate – Ms Hilditch took the job in 2008, as the financial crisis turned into a recession. A jobs site for the public sector couldn’t thrive and in 2011 she was made redundant. 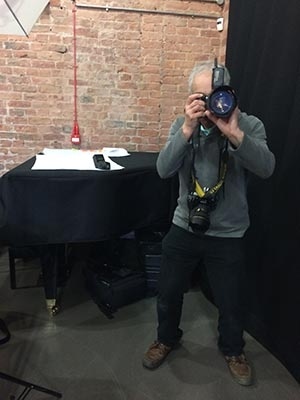 ‘I spent a few months thinking, what do I want to do next?’ she recalls. ‘I wanted to use the new digital skills I’d learned [but] doing something with a social purpose.’

Then, the opportunity came up at Thames Valley, where she has worked since 2011.

Geeta Nanda, chief executive of Thames Valley, had already worked with Ms Hilditch at Notting Hill. ‘One of our key strategic objectives was to look at digital transformation around the organisation. Jayne had a very unique set of skills. She’s great fun,’ adds Ms Nanda. ‘She’s always up for trying something different. People love working for her as well as with her.’

‘I was interested to interview them to see if they were really up for modernising and doing things differently. What I didn’t want to do was push water uphill,’ adds Ms Hilditch. ‘Happily, Geeta was very clear she wanted to do the new things.’

At Thames Valley, Ms Hilditch has taken on the project of modernising the housing association’s digital services. She is typically outspoken about the failures of the housing sector’s existing tech; especially the back-end systems that staff use day-to-day, which she refers to as ‘hostageware’.

‘The vendors are lazy, complacent, and they know that core housing management systems are very painful things to change. Once you’ve got a system in, you’ll probably upgrade it rather than ever take it out, and that means they know they have you on the hook for repeat business, year on year on year. There’s not much competition in the sector.

‘None of them have great products,’ she concludes. The systems are old-fashioned in design and the back-ends are ‘pig-ugly’, she adds.

Thames Valley responded by building its own ‘middleware’ – this software interacts with the back-end system and has enabled Thames Valley to set up a modern online system for its tenants to pay their rent.

The result speak for themselves. In the past, tenants could pay their rent using the Allpay website or app. However, only about 10 tenants a month used this option. Since ‘MyTVH’ went live in December, this has risen to about 900 online payments a month. Of those payments that were made over the phone, 40% have shifted online.

Ms Hilditch is understandably proud of this, calling MyTVH the success of her career. ‘Use the computer to do high volume, low emotion transactions, and use the fleshy human beings, the sentient human beings, to do things that need judgement and empathy,’ she says.

The 14,500-home association also has an eye on the start of universal credit. ‘Every hour a revenue officer is processing a transation is an hour they’re not spending helping a customer sorting out their benefits.’

Next, Ms Hilditch is turning her attention to a similar project for Thames Valley staff. Again, the association will build its own software add-on, to produce something more user friendly.

And Thames Valley staff are trying out different tablet devices.

‘They end up in a customer’s home, they flip open their laptops and the customer is sitting on the other side of the screen. It’s very much an us-and-them kind of transaction because that screen in front of you shows you’ve got all the information and all the power.

‘If you’ve got a tablet, you can sit alongside the customer and look at their rent account, look at their repairs or whatever the issue is. It’s remembering the human element of technological transaction,’ Ms Hilditch says. 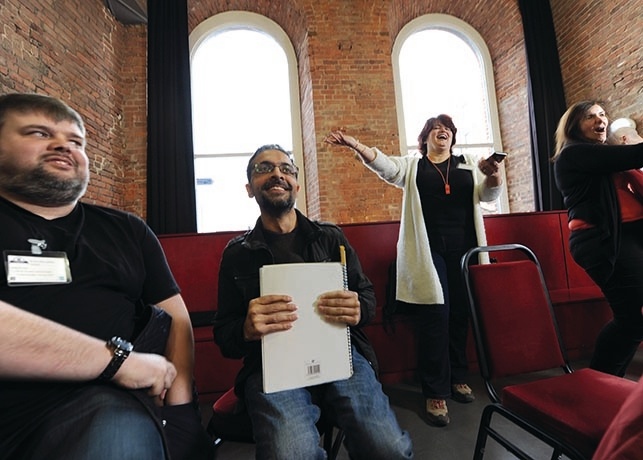 It was at also Thames Valley that Ms Hilditch started the first housing camp in May 2013. ’We used Thames Valley’s office on a Saturday after hours. A hundred or so people turned up,’ she recalls. That first housing camp was focused mostly on social media and technology, but today’s sessions are on a vast array of housing topics.

Many of them are not too far off the programme at a traditional conference. A session on ending responsive repairs prompts audible ‘ooohs’ from the audience when it is suggested. A well-attended session in the afternoon is about continuing the fight against the bedroom tax.

After chivvying housing into a new technological age, Ms Hilditch says that Thames Valley is ‘definitely my last job in housing’, with characteristic openness. The next thing? Ms Hilditch is in the middle of building a ski chalet in France with her husband. ‘I’m going to run the ski season, I love skiing and I love being up a mountain, and I love the idea of living differently.’

From unconference, the next logical step is the unjob. 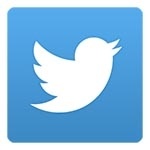 After asking on Twitter and Instagram for questions to pose Jayne Hilditch, a rush of queries come in.

Some are unserious (‘If #clarkson ran a housing association what would his mission be?,’ prompted @Dylan_Voluntas. Ms Hilditch preferred Top Gear when it was about cars, not Jeremy Clarkson. ‘UGH,’ she adds.)

What would happen if housing conferences were replaced with unconferences for a year, asks Paul Taylor, founder of Bromford’s innovation lab, via Instagram.

Gesturing towards the housing professionals in loud and vibrant discussion, she says: ‘You go in there and you look and there are people leaning in and listening, as opposed to…‘ At this point, Ms Hilditch leans back and mimes a snore.

Ditching the presentation-led conference could interrupt the power structure of the housing sector, she points out. ‘A lot of people voting with their feet would be very illustrative about what people are interested in versus what we think they’re interested in.’

← In These Cases of Abuse, Her Money Was No Defense (Women’s eNews latest)
Hard graft: an interview with Isabel Hardman (Inside Housing latest) →