What happens when a hospital or clinic isn’t needed anymore? What if the NHS sold the land, and in its place is constructed houses and flats?

This is the operation that some senior health officials are hoping will transplant cash into England’s health system. NHS officials hope to pump out as much as £7.5bn from this procedure. But one of the side effects, the NHS and government hopes, will be an extra dose of land for housing.

“Every penny we save allows the NHS to purchase more healthcare.”

Meanwhile, communities secretary Greg Clark has told government departments ‘to loosen their grip on sites that are standing idle and to turn them over for housebuilding’. The NHS will almost certainly be required to make a contribution to meeting a target of releasing enough public land to build 150,000 homes in the next five years.

But how are these plans shaping up? How much of a contribution can the sale of NHS land make to meeting housing need? And where – if anywhere – do social landlords fit into the operating theatre?

To find out, Inside Housing looked at one small corner of the NHS estate: NHS Property Services.

This is a company set up on 1 April 2013 to take ownership and management of some £8bn in NHS assets. The body was created by the Health and Social Care Act 2012 with the explicit aim of managing the NHS’s estates in a more efficient way, which includes making better use of land and buildings that are no longer needed for healthcare.

“We would be more than happy to work with any public bodies in regards to delivering affordable homes on their land. The difficulty is always achieving the highest land values when bidding against private developers on the open market.”

Its remit sounds gigantic but the company, which has only one shareholder – the secretary of state for health – has on its books only 10% of NHS land and property. (Exactly which land titles were transferred to NHS Property Services is a rather complicated equation – this is land that was previously owned by a primary care trust -or PCT – where there was not a single tenant that occupied more than half the building.)

PCTs were responsible for providing healthcare in the community; for example, GPs, community nurses, walk-in centres and hospitals, until they were abolished as part ofwelfare reforms in 2013.

In 2014/15, NHS Property Services was given the task of ‘delivering new housing units for the country’ as one of its key priorities for the financial year, and an explicit target to ‘release land sufficient for at least 1,440 residential units’, by halving the amount of void space. It also had a target to facilitate 2,050 new homes in its first two years – which it just exceeded, hitting 2,061 homes. (No targets had been set for this financial year at time of going to press.)

How much money could the NHS make by selling unused land?

£7.5bn is the figure most cited by health officials and government, as the total that could be raised from selling surplus NHS land. The number comes from a 2013 report on closing the NHS’s funding gap written by the health regulator Monitor.

But The King’s Fund health charity analysed data from sales to date and came up with a much more modest figure. It says the NHS could raise £700m immediately through the sale of land, and an unidentified additional sum in the medium and long-term by ‘reconfiguring’ its estates. NHS Property Services has so far raised £97m.

It should be pointed out this is small potatoes according to some estimates; a report by consultancy firm EC Harris last year suggested that 70,000 homes could be built on underused bits of the NHS estates in London alone. But, with this mandate, if any part of the NHS is likely to take the initiative on housing projects, surely this is it.

Tony Griffiths is the director of NHS Property Services in London. ‘The real upside for us is every penny we save allows the NHS to purchase more healthcare,’ he says. ‘So it’s more hip replacements, more physiotherapy, more GPs in the system.’

When it sells excess land and properties, NHS Property Services helps boost the supply of land. But, Mr Griffiths explains, the company’s main contribution to increasinghousing supply is using its on-staff town and country planners to apply for planning permission ahead of sale.

This isn’t altruistic – it only intervenes when securing planning permission will increase the value of the land.

‘Our first point of call is nearly always with the planning department, just to find out what they would allow us to do,’ Mr Griffiths says. This involves working out how much affordable housing will be required, as well as other policies that will affect any development on the site, such as limitations on height and style. The end result is often more homes, at least on paper.

Before the company was set up in 2013, any of the 161 primary care trusts (PCTs) could have done this sort of work to spruce up the attractiveness of a site it was about to sell. But, Mr Griffiths says: ‘Previously, PCTs would not have had the resources to employ specialist town and country planners, and acquisitions and disposal surveyors, to allow us to get best value. Property for a PCT was probably one of the lower priorities because they were focusing on purchasing and/or delivering healthcare.’

It’s hard to measure if NHS Property Services has trumped the record of PCTs, either in raising more money or ‘facilitating’ more housing. Mr Griffiths has no figures for the number of homes or disposals before the creation of the company. So far, NHS Property Services has brought in £97m through selling 145 properties, but Mr Griffiths explains most of these were holdovers from sales started before the company was founded. 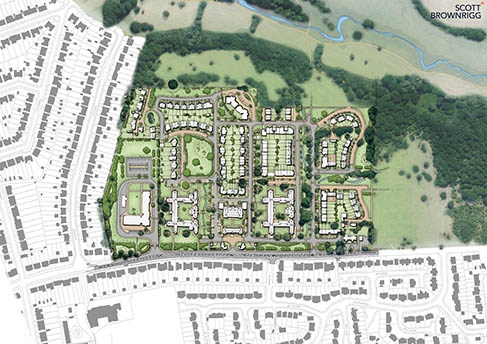 NHS Property Services is seeking planning permission for 290 homes on this Hornchurch ex-hospital site, up from initial council preditions of just 25 houses.

Still, there are some signs that putting planners on the case has worked. For example, NHS Property Services is applying for outline planning permission for a development including homes and a health ‘hub’ on the site of a disused hospital in Hornchurch, on the edge of the greenfield ring around London. ‘I can imagine if you were a child in the summer of the 1960s and 1970s, it would be a great playground in the summer, and a dangerous place now that it’s completely empty. So we have to do something with the site,’ Mr Griffiths says.

“We’ve had conversations with the NHS centrally which have generally been constructive and positive.”

At first, the local authority was indicating that the site would only be suitable for about 25 family houses, but the company now hopes to secure permission for 290 homes.

So far, so good. But how much leeway is there for NHS Property Services to work directly with social landlords, or cut deals that increase affordable housing? Talking to housing associations, so far the prognosis is poor.
‘We would be more than happy to work with any public bodies in regards to delivering affordable homes on their land,’ says Jason Amos, director of property services at 20,000-home housing association Moat. ‘The difficulty is always achieving the highest land values when bidding against private developers on the open market.’

Innovative projects are theoretically possible – but NHS Property Services must seek explicit permission from the Department of Health if a disposal will bring in less than top market price.

‘If we think we’ve got a strong enough case, we can take it to the Department of Health to see if we can get approval to do something that doesn’t necessarily deliver the highest receipt,’ Mr Griffiths says. But has this ever been tried?

‘Not since I’ve been involved in disposals in London,’ Mr Griffiths says.

Jerome Geoghegan, group director of development and sales at L&Q, a 71,000-home association with one of the biggest building programmes of any in the country, says: ‘We’ve had conversations with the NHS centrally which have generally been constructive and positive. We’ve [also] had conversations with a couple of trusts, but we haven’t seen any land come forward for affordable housing as a result of that.’

L&Q has found that trying to build affordable housing on public land is no different to building on private land.

Andy Gamble, director of development and growth at Accent Group, tells the same story. The 20,500-home association’s only experience has been ‘when NHS land has been sold to house builders and then they’ve come to us’ for the affordable housing required under the section 106 agreements.

Would it ever be possible to persuade the government? Possibly. A report last year by the Smith Institute estimated that building supported housing on the surplus land could save the NHS £6bn over 25 years, by reducing demand for NHS services among tenants.

The National Housing Federation (NHF) has put forward some proposals, such as inviting bids on the quality of the scheme, as well as price, or the NHS retaining the freehold for the land and leasing it to housing associations to build on. Such deals have been done using local authority land.

But how successful is this likely to be? Even within the NHS, this has proved difficult. Last year, the Royal Marsden Hospital got embroiled in a fight with its next-door neighbour, the Royal Brompton Hospital, over a prime site in Chelsea which the Brompton wanted to sell for luxury flats. The Marsden wants to buy the site for £30m to expand the hospital, but the Brompton said it could raise as much as £130m selling privately. The plans stalled over summer 2014.

Mr Griffiths is quick to state that NHS Property Services only disposes of land that is not needed by clinicians. Still, if a hospital can’t compete against the highest bidder, what luck will housing associations have? ‘We’ve got an enthusiasm and an appetite to ensure that we do not end up with surplus buildings hanging around in the NHS,’ Mr Griffiths says. ‘If they are surplus and genuinely not needed, it’s our duty to dispose of them as quickly as we can while getting the best value.’

1 comment for “Operation NHS land (latest for Inside Housing)”