A day with the fire service…

If you were thrown into a life-or-death situation tomorrow, would you snap calmly into action? If you work with disabled, older and possibly frail tenants, the question of what to do in an emergency takes on even greater importance.

“We train our ILAs on a regular basis, but doing a table-top exercise is one thing, and running a live exercise involving buildings smoking [is another].”

With alarms ringing, casualties clamouring for attention, and relatives wanting to check residents are safe – not to mention journalists circling for information – responding to a fire could be one of the most difficult moments of a housing professional’s working life.

For this reason, the independent living advisors (ILAs) who manage care homes at Havebury Housing Partnership are regularly trained on what to do in case of a fire.

Usually this training is based in a classroom. But last week, the 6,000-home association put 12 of its ILAs through an adrenaline-filled exercise with Suffolk Fire & Rescue Service, to test their reactions in case of a care home fire. And Inside Housing tagged along to see how this type of exercise can put staff – and procedures – through their paces. 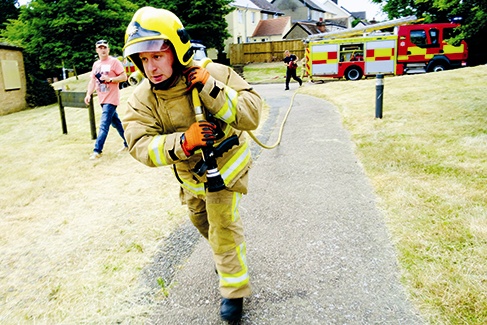 A former care home called Erskine Lodge in Great Whelnetham near Bury St Edmunds is the location for the exercise. The residents moved out about a year ago, and much of the interior has been stripped. Bits and pieces are strewn on the carpet, and the windows have been boarded up with special shutters by the fire brigade, which has already run three of its own training exercises on the premises as it awaits redevelopment.

The ILAs are shut away in an office. They have not been told this will be a full-on ‘live’ exercise, so Inside Housing can’t join them, in case we accidentally tip them off.

Instead, we wait outside for the action to begin. Two firefighters in full gear are cordoning off one wing of the care home, using a smoke machine to fill half the building with a ‘cosmetic’ smoke. It is safe to breathe, a passing firefighter assures us, but makes this test as real as possible. (Neighbours have been informed ahead of time, to avoid worry over any smoke or the presence of the fire service.)

Meanwhile, Havebury housing staff are getting ready to play the part of residents.

Andrew Preece is a neighbourhood ranger for Havebury, and has the role of a confused tenant. ‘I’m going into the smoke-filled bit,’ he says, with noticeable excitement.

The idea for today’s exercise came from Edward Zipfell, health and safety facilities manager at Havebury, a job he took after more than 20 years working for the fire service. ‘It’s not me trying to keep hold of an old dream,’ he says. ‘We train our ILAs on a regular basis, but doing a table-top exercise is one thing, and running a live exercise involving buildings smoking [is another],’ he says. The hope is this will allow Havebury to finesse its fire safety plans – and help prepare the ILAs for how to react in case of a real incident. 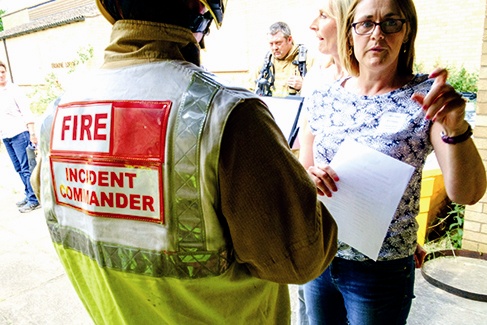 Jane Foort made the 999 call

The housing association has only ever dealt with individual house fires before, and none of the ILAs has real-life experience of such an emergency. Today is a good training opportunity for the fire service too: district commander Pat Dacey is in charge of setting up the exercise, making sure everything is ready to go. Such fires are unusual:  Mr Dacey explains that he has only dealt with one care home fire in his entire career.

Yet such incidents do happen, and they can be deadly. In London alone in 2013/14, there were 527 fires in care homes and sheltered accommodation, resulting in two deaths. Last year, Anchor – which has more than 1,000 care homes across the UK – was fined £170,622 over fire safety failings at its Rose Court care home in Bermondsey, after a 2010 fire which led to the death of a resident. Such is the serious backdrop to today’s exercise.

Up the road, three fully-staffed fire engines are waiting to respond.

Suddenly, it’s time to go. A firefighter opens the door and a waft of smoke curls out. The alarm sounds and the ILAs pour out into the entrance hall.

There’s a mini-rush towards the fire alarm console on the wall: ‘Where is the fire?’ someone asks. ‘It’s in the warden’s office,’ is the response. The group start looking for the ‘fire wallet’ – a red bag prominently placed in every sheltered scheme, which includes crucial information such as which tenant lives in each flat, and their contact information.

Every second seems to tick past incredibly slowly, with the smoke roiling. Even though this isn’t real, there’s a palpable tension. It only takes a few moments for a leader to take charge. It’s Jane Foort, who has been allocated the role of ‘scheme manager’ of Erskine Lodge for the purposes of the exercise.

She picks up the care home’s phone and calls 999. The call doesn’t go through. Hands shaking, she borrows someone’s mobile phone and calls again, asking calmly for the fire service and giving the address. (This is a real 999 call, although the emergency responders know that a training exercise is taking place.) 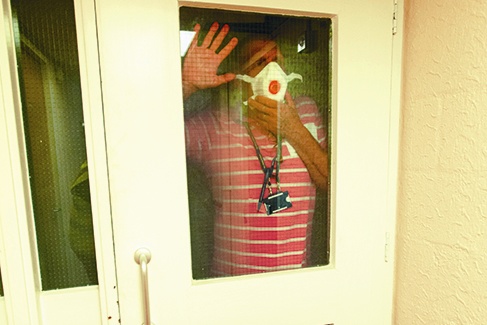 Andrew Preece plays a ‘resident’ trapped behind a door

After putting down the phone, it’s time to delegate: some ILAs are sent to check on the people in the wing of the building that’s not been affected by the fire. This care home has a ‘stay put’ policy, so for now, most of the job involves locating and accounting for all the residents.

To find out how many residents are inside the smoke-filled wing with the ‘fire’, others go around the outside of the building, banging on the windows and talking to the people inside.

The minutes tick by.

While we wait, Ms Foort and another of the ILAs, Karolyn Jacobs, are wondering what to do about the alarm: leave it on, or turn it off? ‘They [residents in the safe part of the building] may start coming out of the rooms,’ Ms Foort points out. Still, the decision is taken to turn off the alarm – later at the debrief this turns out to be one of the points of contention. The advice is to leave the alarm ringing so that residents who are ‘staying put’ know there is still a fire going on.

Finding a location to train

When the decision was taken in 2012 to shut down the Erskine Lodge sheltered housing scheme, due to falling demand for its 24 flats for older people, Edward Zipfell spotted an opportunity.

‘It was a great opportunity to work with the emergency services,’ he says.

Once the fire engines start to turn up, everything swings into action again. The fire service’s incident commander is immediately in charge, and takes Ms Foort aside with a series of questions. The aim is to find out where the fire is exactly, and which residents are still inside.

This is nothing like a fire on TV or in a film: the firefighters don’t just leap into the flames – they are building up a thorough picture of who is inside before entering, by asking questions and using thermal imaging.

‘We’ve been looking on the outside of the windows, but we couldn’t go in there,’ says one of the ILAs.

The incident commander calls for back-up and the other fire engines turn up: more than 17 firefighters attend in full gear. They spring into action, unrolling their hoses.

Suddenly, there’s a banging on the door of the smoke-filled wing of the building. Inside, Mr Preece – who is playing a tenant with smoke inhalation – is trying to get out. Two firefighters rescue him, leading him out to the fire assembly point on the grass outside the home, where most of the ILAs have the task of keeping everyone calm. 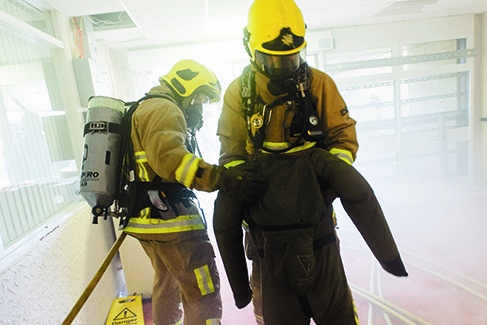 Firefighters carry out a ‘casualty’

Just as everything seems to be under control, Mr Zipfell decides to make the exercise more complicated. ‘I’ll get someone from the press to turn up, I think,’ he says, slightly mischievously. Now, the fire service and Havebury staff have to contend with a ‘reporter’ from the local press, trying to get closer than he should to the building, and sneak in interviews with the firefighters, ‘residents’ and staff.

Another difficulty: a relative of one of the residents has arrived. Mel Walmsley is an income advisor at Havebury. But today she’s fully inhabiting the part of the distressed relative. ‘Why is my mum still in there?’ she asks in a panic, before trying to dash into the building. A firefighter catches her before she can run into the burning block, and the ILAs try and calm her down. ‘If my mum was really there, they wouldn’t have stopped me,’ she says afterwards.

“If my mum was really there, they wouldn’t have stopped me.”

Then, two firefighters emerge from the building. They are carrying a body. This is really a stuffed boiler suit, but it feels surprisingly sombre as the casualty is dragged out onto the grass near the survivors, and given medical aid.

‘A body! A body!’ shouts Peter Dunsdon, anti-social behaviour and tenancy co-ordinator at Havebury, who is one of the actors. ‘Move it away,’ one of the senior firefighters says.

Then, another two casualties are brought out – an adult and a child.

Ms Walmsley, playing the relative, gets even more distraught. Why have the firefighters not gone in to rescue her mum yet? ‘There’s smoke coming out and she’s still in there!’

Gill O’Donnell, another ILO, tries to comfort her and keep her away from the building. ‘Stay here with me,’ she says.

Some of the residents are given oxygen. One is in a wheelchair, another is blind. Others are simply confused and afraid. 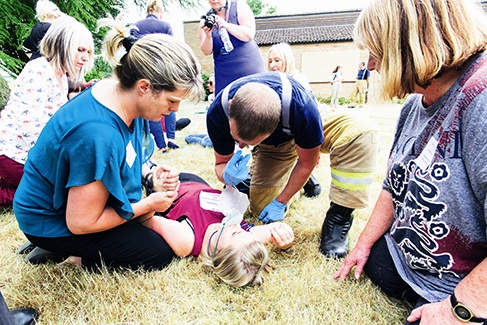 Training exercise: A firefighter administers first aid to one of the ‘residents’, played by a housing professional

The firefighters want to know: is everyone accounted for? No, there’s still one resident missing. At last, someone calls her mobile phone: she’s at the shops.

Hours after the alarm went off, the incident is over.

Are the ILAs now prepared for an emergency? Paul Edwards, director of resources, says: ‘It felt like a real real-life scenario.’

Lessons have been learned – for example, there was nothing in the emergency plan to call a senior person from the housing association in the event of a serious incident. Havebury’s staff will now go back and re-write its plans.

Asked if he would advise other housing providers to carry out such exercises if they have the opportunity, Mr Zipfell says: ‘Absolutely! I would describe it as invaluable.’

The biggest change, though, is that staff know what to expect should the worst happen. As one of the ILAs observes later, ‘We’re never going to be more confident.’