Kriss Akabusi’s most famous race might be the 1991 World Championships in Tokyo, when he pushed Britain to a gold medal and broke numerous records in the 4×400 relay.

“I’ve got a heart for young people.”

Today’s location couldn’t be more of a contrast: the Aragon Housing Association office in Bedfordshire in 2015, munching sandwiches.

Mr Akabusi unleashes his famously jolly laugh, which boomed joyously through our TV screens for what felt like the whole of the 1990s, within less than a minute of sitting down. In a completely accurate prediction of the two hours ahead of us, he immediately jokes: ‘There are many charges against me, but talking too much is one of them!’

We’re here because for about two years, Mr Akabusi has been working on a project with the 6,500-home landlord to help struggling young people turn their lives around. 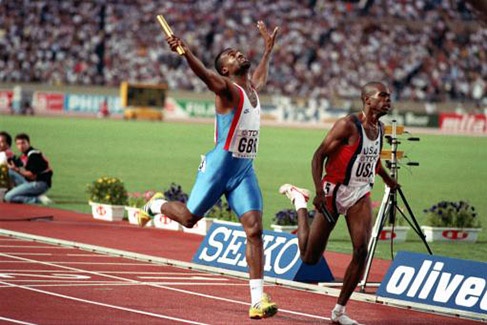 Kriss Akabusi (left) crosses the line to win men’s 4x400m relay gold at the World Championships in Tokyo, in 1991

On the face of it, this sounds like a bizarre collaboration, so of course Inside Housing couldn’t resist the opportunity to find out more.

It is immediately clear though, that it’s not so much bizarre as the conclusion of years of working with young people, motivated by the athlete’s own experiences.

‘I was invited to Grand Union conference as a keynote speaker,’ Mr Akabusi explains – Aragon is one of three housing associations in the Grand Union group. For years, the athlete has been travelling the world telling the story of his life – how he was raised in the care system, before going into the army. And how, aged 16, a Sergeant Mackenzie took Mr Akabusi under his wing, encouraged him, and helped him nurture his talent.

‘I’ve told that story up and down the country, all over the world, since probably about 1995,’ Mr Akabusi says. But at this particular conference, something was different. He happened to be sat next to Aileen Evans, managing director of Aragon.

“I knew there would be a back end of the programme, I just didn’t know what it would be.”

‘She’s got some really fantastic ideas, and [we] thought there’s got to be some synergies here,’ he adds.

The Akabusi Company, set up by the hurdler to focus on motivational speaking and workshops with a charitable trust attached, had already tried to do some projects working with young people, intending to assist in their personal development. ‘I’ve got a heart for young people,’ he explains, due to his background.

But it hadn’t been plain sailing. ‘It was really hard work to get young people,’ Mr Akabusi says. ‘I might be known to people of a certain age, but to a young kid of 18, I’m just a crusty old bloke who’s got a sun tan talking about what? I’ve got no way of engaging them, to say, come on, honestly, I mean you good.’

Aragon – which has numerous youth projects – was a way in. 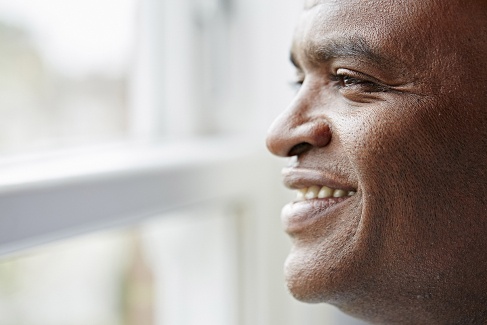 Kriss Akabusi is working with Aragon in part because it is embedded in the Bedfordshire community, and finds it easier to find young people

Ms Evans jumped on the opportunity to take that youth work further, and they met up about six weeks afterwards. ‘I said, “Well, there must be a way we can make this work.” We spend £10m a year in these communities, through major repairs, development, responsive stuff. There must be a way. So I committed to you,’ she says to Mr Akabusi, ‘without having a back end of the programme. Because I knew there would be a back end of the programme, I just didn’t know what it would be.’

The housing association board “took a £30,000 courage pill”

The next step was going back to the office and working out what that was. The aim was to work with young people who are not close to being able to get a job. Mr Akabusi and his team would come in one day a week to work with 14 young people (it’s paid £4,000 per cohort). Then for the rest of the week, the young people would do a pre-apprenticeship with local business Construction Gateway. Howard Cottage, a 1,600-home housing association in Letchworth, also came on board to help fund the programme to the tune of £12,000.

Cementing it all together, half of the young people would go on to full apprenticeships, and help deliver Aragon’s bathroom and kitchen replacement programme.

The name of this initiative? Project Mackenzie, after the sergeant who first inspired and mentored Mr Akabusi. Mentoring was also to be an important part of the programme, with each of the young people getting a buddy on the Aragon staff.

Ms Evans quickly presented the idea to the Aragon board. ‘The chairman said, “How will we know when it’s been successful?”,’ Ms Evans recalls. ‘It’s a perfectly legitimate question to ask.

‘So they took a £30,000 courage pill, because that is what we put in to get it going, and we went with the first programme.’

The project started with its first cohort of 14 young people only five weeks after that first conversation.

To find candidates, youth and community development officer Nicola King explains: ‘I went through housing officers, they had referrals, I went through other organisations, Troubled Families, Jobcentre referrals. I went out with a sandwich board! I wanted to see parents and grandparents, not just young people.’ 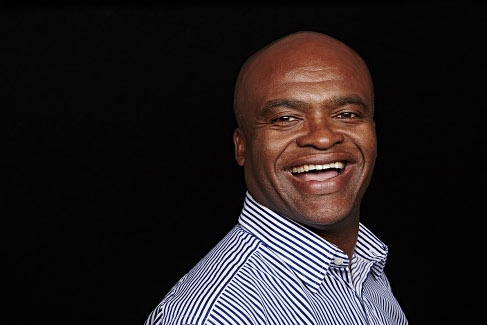 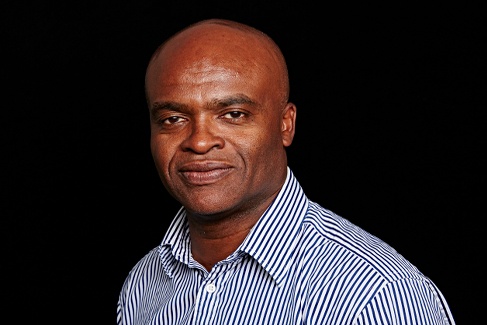 Now they had young people, what did the project actually look like? Mr Akabusi obviously has achieved great heights of inspirational success. But that’s not the secret to his sessions, which involve activities such as creating a dreamboard showing what their life will look like in five years’ time.

The aim is to show that failure in some areas – top in the young people’s minds is probably school – doesn’t preclude success. ‘I know I can spell,’ explains the 56-year-old, by way of example. ‘But when I was a kid, I was told I couldn’t spell, so when I get flapping I can’t spell. I can be a world champion and I can run a business, but there are certain moments when I can’t spell.’

“Those young people are healthier, wealthier and more economically active. They’re doing this great job in terms of our bathrooms that a contractor who tendered for it couldn’t get anywhere near.”

The sessions also involve practical assistance – Aragon provides lifts to make sure young people turn up, and a caring environment. It’s an almost parental level of intervention, the opposite of the ‘pull your socks up’ approach to young adults popular at the moment.

As Ms Evans put it, the message was: ‘We are going to show this interest in you. We are going to listen to you. And you will get something at the end of this.You will not fail.’

In that first cohort, the seven best candidates went on to an 18-month apprenticeship with Construction Gateway.

But the other seven were supported into other training, and mentored. One went on to a rail training programme, and now works in King’s Cross station, for example.

A local academic is in the middle of a study of the programme and its outcomes. But Ms Evans is convinced that Mr Akabusi’s own contributions are crucial. ‘I’m going to embarrass you now, but actually you’re one of the most thoughtful, articulate and emotionally intelligent beings I’ve ever ever come across,’ she says. The Olympian goes quiet for the first time during our interview.

Now, Aragon and Mr Akabusi are on the fourth Mackenzie cohort, and 39 young people have completed the programme, not all focused on the trades. One cohort helped young people get jobs at the local Center Parks. The current cohort is again focused on construction (see box below).

So successful have the construction apprentices been, that Construction Gateway has now replaced Aragon’s old contractor for bathrooms, as they are achieving a higher quality.

Ms Evans says: ‘Those young people are healthier, wealthier and more economically active. They’re doing this great job in terms of our bathrooms that a contractor who tendered for it couldn’t get anywhere near.’

The aim, though, is that the programme will have a lasting impact on young people’s lives. 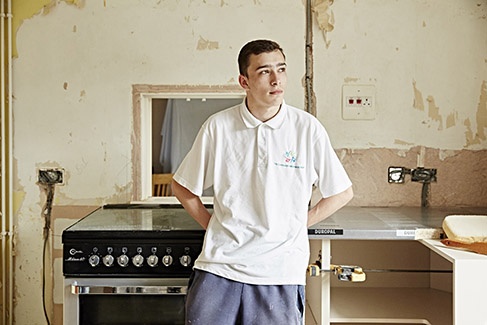 At 18, Reece Gas has been living in a hostel in Milton Keynes on his own. In order for him to participate in Project Mackenzie, Aragon arranged funding for a train and bus ticket. He is particularly happy today, because he has managed to get a moped, again with help from his mentor on the project. ‘I’ve come from nothing, living in a hostel,’ he says. Soon he will move into a one-bedroom flat.

This practical assistance has also helped transform Mr Gass’ aspirations, and brightened his view of his future. He had been doing an electrical course at college but was not really enjoying it. A tutor suggested Project Mackenzie might be a good option for him. ‘I was messing around a bit and I came off track a bit,’ he says. ‘I really need to do something with my life. I don’t want to be a nobody.’  Now, there could be no more enthusiastic advocate for the project and Aragon. He says: ‘They’ve done so much. More should be like them, to be honest.’ 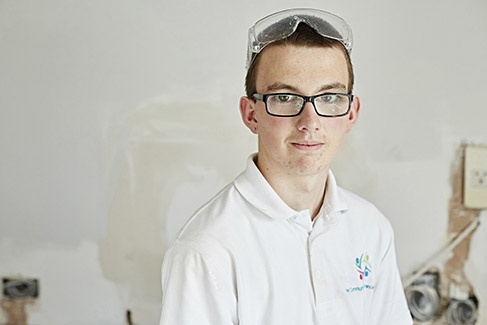 At 16, Stephen Collins is the youngest of the young people in this cohort of Project Mackenzie. For the first weeks of the programme he was still taking school exams, and had to juggle coming to the project in the day and revising at night. ‘It’s the best thing I’ve ever done,’ says Mr Collins, who lives in Letchworth.

And the highlight? ‘On the month pre-apprenticeship, I really did enjoy tiling,’ Mr Collins says. 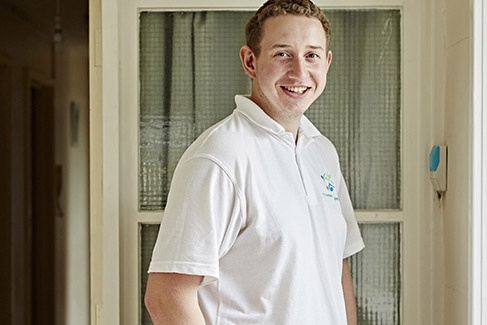 A leaflet dropping through the letterbox of his home in Letchworth is how Curtis Butler found out about the Project Mackenzie programme.

For the 22 year old, the promise of working in construction was appealing. ‘It’s what I’ve always wanted,’ says Mr Butler, who has been in and out of work since he left school at 16. Now, he is hoping to set up his own business.

← Fire drill (Inside Housing)
Why are teenage girls’ diaries so controversial? →