The Bailie Show (from Inside Housing)

When the Northern Ireland Housing Executive started looking for a new chief executive, you couldn’t blame the candidates for quailing a bit at the prospect.

It’s no small fish; an 89,000-home social landlord with a budget of £750m. The body also administers housing benefits in Northern Ireland; allocates social housing; disperses grant to housing associations; and champions mixed communities in a region where 90% of social housing is segregated by religion and politics.

“We would like to be able at some point to start building new houses, but in the right context.”

And then there is the small matter of political deadlock over business-critical issues such as welfare reform, only resolved last week. And proposals have been floated since 2013 that would dismember the very organisation the new chief executive was signing up to lead. Meanwhile, a report by Savills found that the Northern Ireland Housing Executive (NIHE) must spend £6bn to bring its stock up to modern standards.

Against this backdrop, the organisation itself has seen significant change at the top in recent years. Interim chief executive Mags Lightbody resigned in May after just a year in the post.

All this for circa £125,000 a year – about the same as the chief executive of a medium-sized housing association might take home, with none of these added worries. 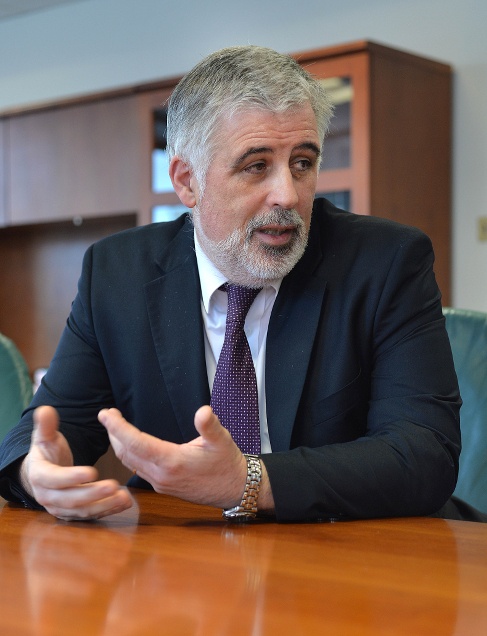 Clark Bailie took on this task in September. On meeting in the NIHE’s warren-like offices in the centre of Belfast, it is quickly obvious that the new chief executive possesses a number of attributes that suit him to the job.

Described by people in the sector as “a gent” and “a nice guy”, Mr Bailie is softly and deliberately spoken. Our time with the new boss is friendly and informative – but nothing unplanned or slapdash slips out.

“Funding – you can’t avoid it. As an accountant I’m bound to say that.”

One of the most interesting revelations is that Mr Bailie “has ambitions” for the NIHE to start building homes again, roughly 20 years since it last put brick to mortar.

Adding to its stock would be a big move for the NIHE, given the proposal to break up the organisation. (The NIHE has transferred 127 homes to housing associations to date, and has a target of 2,000 put into the housing association sector by July 2017.)

But even here, Mr Bailie is careful to make the proposals in the most moderate language possible. “From a Housing Executive perspective,” he says, “we would like to be able at some point to start building new houses, but in the right context. It’s not something that we’re going to rush into next week or next month, but looking at it over the medium to long-term we believe that there could be a very valuable contribution to be made.”

So who is the new chief executive?

Promoted into the job of chief executive after an eight-year stint as NIHE’s director of finance, Mr Bailie’s career to date has been in accountancy.

“I was born, grew up in Belfast, went to school in Belfast, I went to university in Belfast,” he says. Mr Bailie’s father worked in the city’s shipyards, while his mother at one point worked in a shirt factory. “My brother and I were the envy of the school. Certainly, shirt-wise, we were the best dressed young people in our part of Belfast,” he says, adding with a laugh – “I know it hasn’t stuck.” Today, Mr Bailie is conservatively turned out in a navy suit.

Starting in the National Audit Office in Belfast, his career took him to both the private sector and the health service before he came to the NIHE. It’s not a massive leap to suggest that Mr Bailie’s accountancy chops might have been part of why he made an attractive candidate for this job.

Days after we meet, the NIHE gets a significant signal about its future, as Stormont’s political parties come to an agreement that will mitigate the bedroom tax for at least four years. Still, it’s not specifically clear what this means. The NIHE says it is still working with the Department for Social Development on the details, and what impact it will have on housing.

In fact, many of the factors sure to shape the future of the NIHE remain filed under “to be decided”. For example, there is the Social Housing Reform Programme (under which the original plans to break up the NIHE were discussed). But what will that look like? How will the organisation fund the repairs needed to bring its homes up to what Mr Bailie calls “modern standards”? Savills puts the figure needed to catch up on repairs at £6bn over 30 years.

“Funding – you can’t avoid it. As an accountant I’m bound to say that,” Mr Bailie says. “That’s where a lot of discussion around the social housing reform programme has been, that’s where a lot of discussion has been between the Housing Executive and the department and the minster. Those discussions are at a fairly mature stage, but we just haven’t received the point where we have certainty on the way forward.”

The NIHE’s stock maintenance and improvement programme for 2014/15 runs to £162m, “which shocks some people because sometimes there’s this perception that we’ve just stopped, which can’t be further from the truth”, he adds.

“I don’t think anyone ever thought it would be easy. We do our best but we have to recognise that some of these issues are a reflection of the journey that Northern Ireland is going through at the minute.”

One of the other big projects on the NIHE’s to-do list is proving almost as tricky. It is in the lead on community cohesion. Going around the Housing Executive’s estates in Belfast, its centrality to the situation is clear.

The NIHE even owns some of the ‘peace walls’ that bisect the city – built during the Troubles to protect people living along the borders of the different communities. Much of the Housing Executive’s work on this goes on quietly behind the scenes over a period of years – such as work to improve the economic fortunes and strengthen communities in deprived areas, building trust.

The Housing Executive had carved out a reputation for neutrality in Northern Ireland, after it was set up in 1971 to resolve perceptions that councils were allocating social housing along sectarian lines.

The NIHE also works with the housing associations building the new mixed communities with the intention of people being able to live together.

Weeks before our interview, contractors pulled out of a Newington Housing Association project to build a new mixed community in response to threats which the Belfast Telegraph put down to Republican dissidents.

Mr Bailie describes the recent problems as “hiccups” and says they aren’t surprising. “I don’t think anyone ever thought it would be easy. We do our best but we have to recognise that some of these issues are a reflection of the journey that Northern Ireland is going through at the minute… But if you look over the last 30 or 40 years of the history of Northern Ireland, this is nothing.”

The NIHE itself went through its own hiccups in the eight years Mr Bailie was running its finance department. 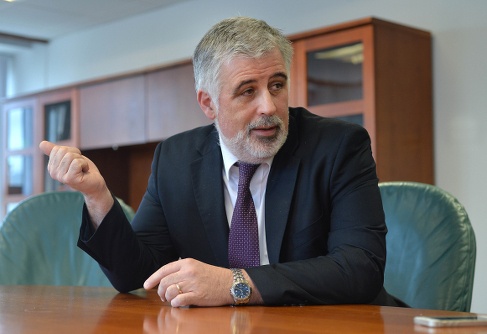 Clark Bailie: “There will always be that healthy tension with the department.”

In 2011, the Housing Executive began investigating overpayment of some of its contractors by some £9-£13m, which turned into a political scandal that was only resolved in August last year. Mr Bailie says those days are firmly behind the organisation. “It did cause us a lot of pain, because it made us question how we managed our organisation,” Mr Bailie says. Now the NIHE has “turned a corner” and put in place the systems of accountability to ensure it doesn’t happen again.

“I was terribly proud of playing a part in the turnaround of the NIHE and sorry to leave such a great organisation and particularly the dedicated staff who work there.”

His relationship with the Department for Social Development seems to be a positive one. Mr Bailie is full of praise for the minister, Mervyn Storey, although he adds: “There will always be that healthy tension with the department.”

A calm demeanour may also have been helpful to Mr Bailie, given a number of sources who spoke to Inside Housingsuggested his predecessor, Ms Lightbody, had something of an abrasive approach.

Ms Lightbody now runs a change management consultancy in Glasgow. “I was terribly proud of playing a part in the turnaround of the NIHE and sorry to leave such a great organisation and particularly the dedicated staff who work there,” she says, pointing out that she was hired to transform an organisation that had been mired in controversy before she arrived. “With the scale of change that was necessary to get NIHE back on top and delivering again for the people of Northern Ireland, I’m sure I would have ruffled some feathers and that goes with the territory.”

Asked if they got on, the new chief executive says: “We got to know each other extremely well. The thing that sticks out for me personally with Mags is my father died in March, Mags was incredibly supportive, very warm, very human.”

As far as the future of the NIHE goes, at the time of press key issues in deciding the organisation’s future were still unclear.

But Mr Bailie says he plans to focus on one of the basics: making sure that the organisation is delivering the services that its tenants need and want.

He says: “What really gives me great happiness is when you go and meet someone, and you realise the difference that our organisation has made to their life. That’s worth so much more to me than trying to get some glory out of this.”

A short history of the NIHE

NIHE founded to address distrust of allocations system. 150,000 homes transferred from 65 local authorities and agencies to the new body

The first House Condition Survey found one in five homes in Northern Ireland unfit for occupation. The NIHE starts programme that will add 80,000 homes

Devolution, and the Northern Ireland Act gives the NIHE the role of promoting good community relations and cohesion

The first mixed housing scheme is built in Enniskillen

NIHE hit by overpayment scandal. It takes over a year to settle

This interview was published on 27 November 2015 in Inside Housing.