How diverse is housing’s leadership? To find out,Inside Housing sent a detailed survey to the 180 biggest housing associations in the UK.

The aim? To build a picture of how diverse the leadership of our sector really is.

One hundred housing associations sent back a response – although not all 100 answered every question.

Our findings are detailed here, but provide a mixed snapshot. For example, women make up just under 40% of housing’s leadership – a far cry from gender parity still, but this outperforms big business in the UK.

BME people’s representation in leadership roles is very low, at only about 4% of executive roles from those surveyed, while four in 10 housing associations told us they have no BME people on their board. Representation of disabled people and LGBT people in these roles is even lower.

Chartered Institute of Housing (CIH) chief executive, Terrie Alafat, says: “We know from our own research that as a sector, housing is actually more diverse than average – it employs a higher proportion of women, people from black and ethnic minority communities and people with a disability than average. But at the top of our organisations, in our boards and senior teams, it’s a different story.”

Not only is this a reputational issue, Mr Robinson points out, it could harm housing associations as they try and adapt to the many changes to their operating environment, from the rent cut to the Right to Buy.

“If housing providers are to make a real difference in terms of coming up with creative and innovative solutions to these massive challenges, they need increasingly to be able to think outside the box. Study after study has demonstrated conclusively that the more diverse the leadership (at both board and executive level), the greater the resulting innovation and creativity.”

Many housing associations state their commitment to diversity, and are actively working on this. Spectrum, to name just one, has a diversity board in place to monitor its equality and diversity strategy.

Yet the depth of the commitment is less clear. Only about 30 housing associations have signed up to the CIH’s ‘10 by 20’ challenges to improve diversity. The challenges don’t set particular targets, but instead commit the organisations to, for example, champion the business case for diversity, and to collect and publish statistics on the diversity of their own executive and board.

“Study after study has demonstrated conclusively that the more diverse the leadership (at both board and executive level), the greater the resulting innovation and creativity.”

Mr Robinson of the HDN points out: “Given how many providers there are across the country, you have to conclude that the number who have signed up to the challenges is pathetically low.”

A clear pattern emerges quickly on speaking to almost any housing association with a more diverse leadership – whether that be in terms of gender, race, sexuality, age or disability: passively waiting to see who walks in the door at interview isn’t enough. This also suggests change is possible. Some boards consider the representativeness of their members alongside a traditional ‘skills matrix’ when they come to recruit.

Cym D’Souza, chair of BME National, which represents BME housing associations, says: “We need to differentiate between those organisations that are not interested in equality and diversity, and no amount of good practice is going to change them (but potentially a very large stick might), and those organisations that really do want to see a diverse board and senior management team and for some reason are still struggling to achieve this.”

Dr Nigel Nice, chair of one of the most diverse boards in the UK, across all our criteria – Nottingham Community Housing Association – points out: “I’m not into the quota system. But I really feel that by having people from a wide range of backgrounds, we do bring a wide range of knowledge.” 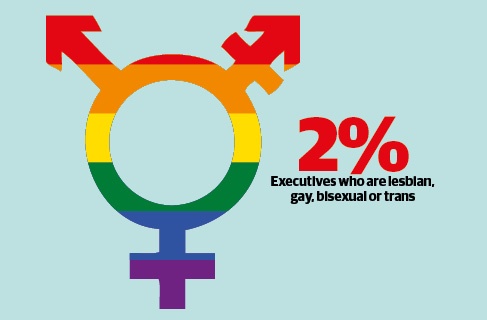 LGBT representation at the top

Representation of lesbian, gay, bisexual and trans (LGBT) people among board members and in executive management is low.

Only nine executives identify as LGBT in our survey – or less than 2%. On boards, the figure is only 14 out of 1,061 people. However, it is difficult to analyse these numbers, as 49 out of 100 housing associations either did not know, or did not tell us, if any of their board members identify as LGBT. Thirty-seven could not provide an answer about their executive team. 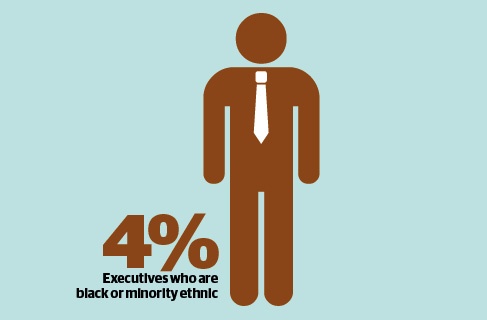 Race at the top

Probably one of the most startling findings of the survey is on representation of black and minority ethnic (BME) people in housing’s top jobs.

Only 19 – or about 4% – of executives from the respondents are BME. The numbers are slightly higher at board level, with 74 individuals – or just under 7%. Although a small number did not hold complete information, four in 10 housing associations that responded told us they have no BME people on their board.

The most recent census for England and Wales found that 14% of the population is BME, so these numbers are well below what might be expected if the leadership of housing associations reflected the general population.
Asra Housing Association, which has stock largely in London and the Midlands, is one of the most diverse ethnically, with a large Asian community. In some areas of operation, the population is 50% BME, points out its chair Aman Dalvi. “We need to reflect the communities where we work – that was discussed when we started to recruit the board members and in the executive,” he notes.

This isn’t a matter of appearances – it’s a matter of reflecting the best skills available, and good connections, he adds. “There are skills out there.”

Peabody Trust, based in London, is another of the more representative landlords – 43% of its executive team is BME, as well as 17% of its board. Stephen Burns, executive director of community investment, says that being representative of the local population is a good “proxy” for being a good employer.

“We don’t positively discriminate, but we are positively aware of what our numbers are, and who we are recruiting,” he adds. “If we had an executive team that’s all male, with no ethnic diversity, we would ask: ‘Why is that? Did it have something to do with us?’” 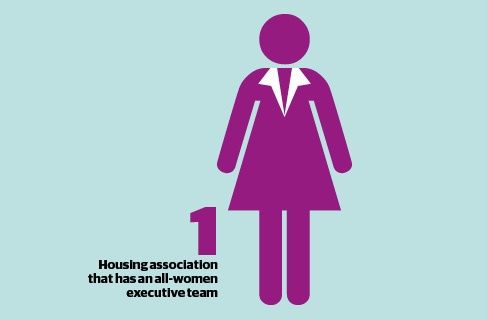 Women at the top

Just under four in 10 of housing association leaders are women, with roughly the same proportion on boards and executive teams, according to our survey.

Last year, we discovered that 25% of chief executives of the largest 180 housing associations are women (Inside Housingsalary survey, 11 September 2015). The results of our leadership survey seem to show that by expanding the net to include other executive-level posts, the representation of women rises dramatically.

The housing sector has already outpaced big business – in October 2015, women made up 26.1% of board members of FTSE 100 companies.

Representation at board level is slightly better, with 23 out of 100 boards reporting half or more of their members are women. No boards of the organisations that responded to our survey are entirely male.

However two – Magna Housing and WM Housing Group – have only one woman on their boards, both made up of eight people. Magna has one woman on its board and none at executive level.

Magna chief executive, Graham Colls, says: “The process of assessing applicants is done professionally and objectively, against the criteria which we specify. Magna simply wants to get the best people available.”

However, the experience of some of the more representative associations suggests that more active steps may be needed.

Barbara Walsh is chair of South Yorkshire Housing Group, one of the very rare associations with a majority of women across both executive (60%) and board level (58%). “We’ve had a diversity champion [on the board] for about nine years,” she says, and it is something that the board does pay attention to in recruitment. But, she adds: “We would always take the best person for the job. We’ve got to where we have got to because the best people have come forward.”

However, including different perspectives can be as valuable as ensuring that different skill sets are represented.

Ms Walsh observes: “If I was in a room with a whole lot of 60-year-old women, there would be such a common view of where the world was going.” 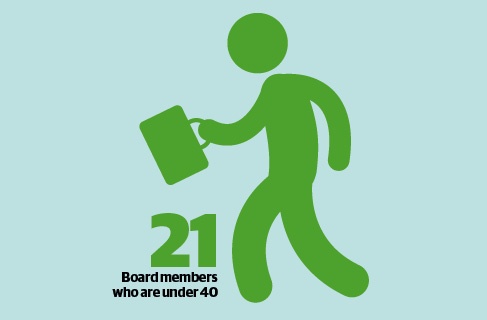 The average age of a board member is 57, according to our survey – this will probably be no surprise. After all, the ideal board member probably has years of experience in business, or perhaps in property development, law or finance.

Still, the survey was notable in revealing very few of housing’s leaders are under the age of 40. In fact, just 21 board members are under 40. Only four are under 30.

For those housing associations which are actively trying to recruit younger people to their boards, including the talents and perspectives of a range of age groups is important.

Town & Country Housing Group has the youngest board member, at 22 years old – she preferred not to be named for this story. A tenant board member, she was given training and mentoring for 12 months before being appointed in November. “It goes without saying that the group continues to support her ongoing learning in the role,” a spokesperson says.

However, other younger board members are not typically tenant representatives, and work in business and finance, as accountants and chartered surveyors.

Nottingham Community Housing Association has one of the youngest board members – Caroline Swann, a trainee solicitor. Her appointment was a result of the board setting up an ‘associate board member’ programme specifically to encourage younger applicants, after which she became a full board member last year.

Dr Nigel Nice, chair of Nottingham Community’s board, says: “I think it brings a range of experience, and a range of understanding of some of the issues.” 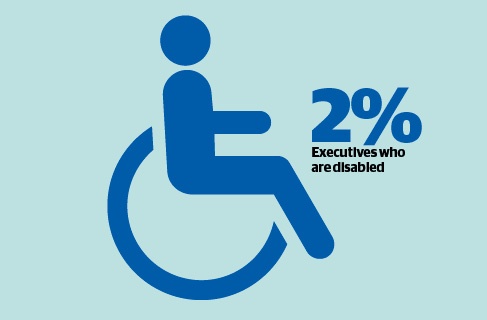 Disabled representation at the top

Our survey found a very low representation of disabled people in senior housing leadership. Out of 523 executives, only seven were identified to us as disabled. On the board, representation is slightly higher – 60 out of 1,061 board members.

But a survey of ‘high-flying’ disabled people commissioned by Lloyds Banking Group in 2010 found that three out of four who had the option to hide that they were disabled, did so. The report, Doing Seniority Differently, concluded: “Interviewees spoke eloquently of their fear that being open might affect getting a job in the first place, their treatment once at work and their chances of promotion. Those who eventually felt confident that they could be open without adverse consequences often found it liberating.”

Out of 523 executives working for 100 housing associations:

2%
Executives who are lesbian, gay, bisexual or trans

4%
Executives who are black or minority ethnic

1
Housing association that has an all-women executive team

2%
Executives who are disabled

This feature was originally published by Inside Housing