Sharing by the sea (Inside Housing)

Exmouth’s beach glimmers in the sunshine as children rush about on the sand, followed at a slower pace by acompanying adults. It’s a scene that has played out since the 18th century, when this Devon town first hosted vacationing aristocrats, cut off from foreign climes by the French revolution.

But Exmouth isn’t just a resort town. The B&Bs for tourists are matched by their equivalent for local residents – Houses of Multiple Occupation, or HMOs.

Step away from the shore by a few hundred metres along St Andrew’s Road, and another shared house is under construction. On the face of it, this is just another red-brick Victorian terrace on a row of terraces, on a road with plenty of HMOs. In fact, this project is almost certainly a one-of-its-kind.

The first difference is the landlord and developer – unlike most HMOs, which are privately run and owned by individuals, the mastermind here is East Devon Council. Even more unusually, it will be let at a social rent to general needs tenants.

“A lot of young, single people, not necessarily with children, were coming to us to be housed.”

Only a smattering of social landlords are going anywhere near the HMO market, despite plenty of discussion over the last few years.

Councils and housing associations alike have for decades offered shared housing for tenants with support needs – for example, disabled people’s housing, or supported housing for residents with mental health or addiction issues. But an HMO, run by a social landlord, for the single tenant? This model has been left to the private sector, often individual landlords with a decidedly mixed record on providing decent, safe housing.

And the second difference is the scale and ambition of this project, at a financially challenging time.

East Devon isn’t just finding a use for void stock – it bought this house for this purpose, paying about £248,000, and is now in the process of stripping it back, before retrofitting it with the needs of house-sharers in mind, to the challenging Enerphit Standard (see box, bottom of page). 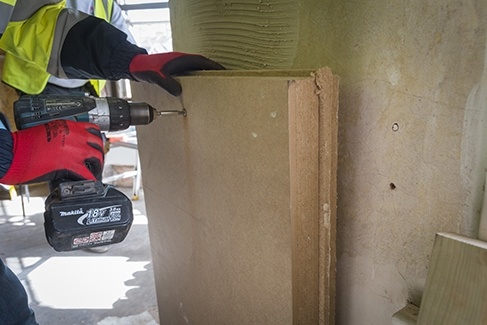 Insulation being added to the inside front wall of the house

The project, which East Devon expects to cost roughly £500,000 in total, will turn the building from a leaky Victorian into an airtight, super-energy efficient house. Walking around the inside of the building, it’s clear the scale of work required – the floor is being dug out and relaid, and the front and back are being covered in insulation.

“Our enforcement section of the council are taking landlords to task all the time around that area.”

Naturally, one might wonder why the council is doing this – and how it will pull it off. The answer goes back to 2013.

“Studying our housing register, we realised that a lot of young, single people, not necessarily with children, were coming to us to be housed,” not a high priority for housing, explains Amy Gilbert, property and asset manager for East Devon Council. “We didn’t really have a lot of accommodation that met that need. So the idea of a shared house was born.”

Sharers moving in when construction is completed at the end of June will be aged between 21 and 55, single, and without any support needs. “We have a lot of people coming to us where their marriage is just ending and they’ve got all their belongings in a bag with them in reception,” Ms Gilbert adds, to describe the typical sort of person the council expects to house here. 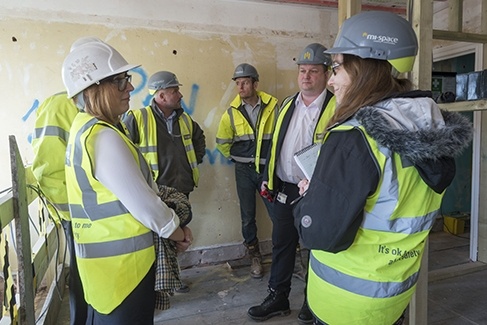 At the same time, East Devon has been mulling its problems with fuel poverty. In the South West, 12% of households are in fuel poverty according to the latest government statistics from 2013. And the region has the biggest ‘fuel poverty gap’ in England – there is a £123m hole between the energy needs of fuel-poor households and how much they can reasonably afford to pay.

“There’s a general assumption from the DWP that people shouldn’t be able to access self contained accommodation if they’re on benefits and of a certain age.”

From this came the concept of renovating the house to such a high specification. “We wanted to look at whether we could combine this and as well as providing a shared house, whether we would also be able to look at the issue of fuel poverty,” explains Ms Gilbert.

The first steps took place at the end of 2013, when the council bought the Victorian building.

The choice of site wasn’t accidental. “Our enforcement section of the council are taking landlords to task all the time around that area, around the standards of their accommodation and health issues,” notes Ms Gilbert. When it’s finished, the council hopes to encourage private HMO landlords to learn from this as an example. 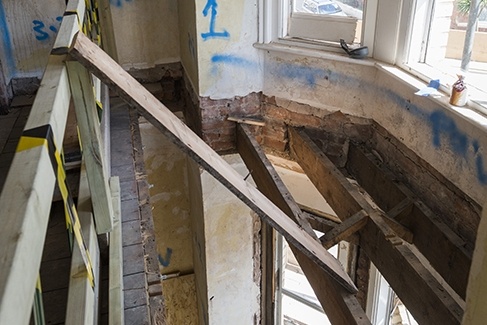 As well as being highly energy efficient, the project has also been designed with sharers in mind – separating it from many private sector equivalents. Each of the six bedrooms has its own en suite bathroom. The kitchen will have a fridge for each resident – the aim being to remove potential areas of conflict between tenants, who won’t have a choice of their housemates.

A seventh room will be converted into an office for use by the council, with the aim of providing an occasional presence in the house in recognition of the increased management requirements of an HMO house.

“We’ve come across schemes that have collapsed at the last minute.”

Future residents will be referred by the council, and will pay a social rent of just under £100 a week, including service charges, which the council says is lower than the private sector equivalent. However, they won’t be getting a social tenancy – instead, they will get a license. This gives the council more leeway to evict if there is a problem with an individual. Residents’ stay in the house isn’t time-limited – but the council expects it will be a short stint for most to meet a temporary need. Residents will be able to live here as long as they like, however, assuming there are no problems.

It is with this considered design that the house really starts to distinguish itself from existing practice in the sector.

Travel back in time a few years to 2012, and social landlords were starting to talk about setting up HMOs for general needs tenants. Back when the most challenging policy from government was the bedroom tax, housing associations and councils worried that two or three-bedroom properties in some areas could become unlettable. One answer discussed in the sector was converting some of these homes into shared housing.

A small number of projects were started. St Vincent’s in Manchester has a ‘snug bug’ programme for young people, who can set up a profile on its website and browse listings for rooms.

Dudley Council joined up with two local housing associations and set up a pilot, advertising shared housing to young people. But the project is no longer up and running, and the council staff Inside Housing spoke to didn’t know what became of the idea. 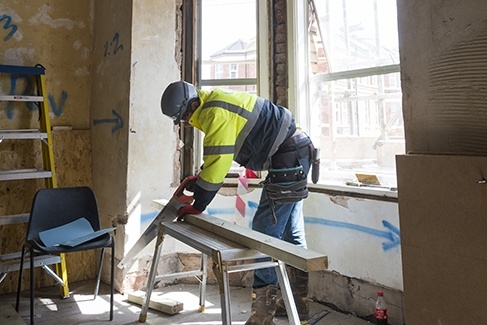 Contractors work on the renovation

Progress is slow for good reasons. Melanie Rees, head of policy at the Chartered Institute of Housing, recalls: “Some of them were looking at it then and saying we could create HMOs – [but that involves] quite a lot of added responsibility in terms of safety and management.”  East Devon says its project is technically not classified as an HMO.

Anna Clarke, a senior research associate at Cambridge University’s Centre for Housing & Planning Research, explains there are some specific issues with tenancies. If residents of a shared house are granted a joint tenancy, what happens when one wants to move out? In the private sector, the remaining tenants can just find a new housemate. In social housing, where consideration needs to be given to allocating housing based on need, this doesn’t work.

If housemates are given individual tenancies, then for technical reasons, the landlord becomes liable for the council tax. This can be reclaimed through rent and service charges, but it is not clear if housing benefit will cover the full amount. “We’ve come across schemes that have collapsed at the last minute because of that,” Ms Clarke says.

Eamon McGoldrick, managing director of the National Federation of ALMOs, was one of the cheerleaders of social landlord-led HMOs. He seems surprised at the idea of a purpose-built HMO, given the pressures on local authority budgets. “Where I was originally coming from, [was] if you’ve just got the property sitting there empty,” he explains. 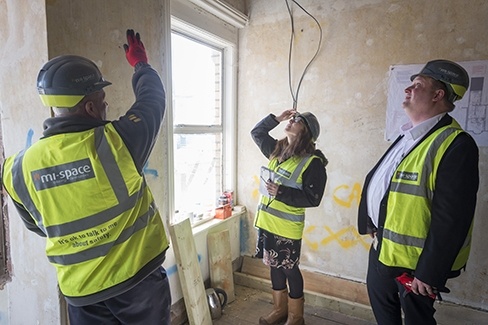 The Exmouth house is, in contrast, exactly the sort of ambitious project that might easily have been scaled back in the light of central government gouging local authority budgets. East Devon is contending with cuts of 55% in central government funding since 2010/11.

Ms Gilbert enthuses about finding a way to stay ambitious in difficult times. “Social housing recently has been pressed in all sorts of ways, especially financially, so it was an opportunity for East Devon to say ‘we’re going to deliver this, we’re going to push the boundaries and go for a very high specification’,” she argues.

So was it a fight to keep this project alive?

“We had to convince members that we could make this work,” acknowledges Ms Gilbert. “There have been opportunities along the way where quite rightly members have said, ‘is this still the way we want to go?’. And we’ve reassessed, and we’ve said, ‘yes, it is’.” Funding has come from Right to Buy receipts and the Housing Revenue Account.

Although local authority cuts and the rent reduction seem to dissuade social landlords from this type of investment, another policy makes it seem like a good idea – specifically, the Department for Work and Pensions’ (DWP) reduction of housing benefits for under-35s to the shared room rate. “There’s a general assumption from the DWP that people shouldn’t be able to access self contained accommodation if they’re on benefits and of a certain age,” Mr McGoldrick points out.

East Devon does not see this as a one-off. Ms Gilbert says, “I’d like to think we’d have similar, or exactly the same –  other shared houses with exactly this level of technology going in.” The council is also using the learning from this project to assess how to tackle fuel poverty in the rest of its 4,222 homes.

And similar projects are popping up in other areas. Barnet in London has set up three shared flats for young homeless people. Inside Housing understands that Tower Hamlets in London is examining a shared housing project for young people without support needs, in response to the pressures of finding affordable places to live in the capital.

Could social landlords be the HMO landlords of the future? These are only small-scale projects, but don’t rule it out.

East Devon’s new shared house will be one of the first renovation projects anywhere in the UK to apply the tough ‘Enerphit’ standard to a Victorian house.

This is the first Enerphit project for contractors Mi-space. Everyone working on the building site had to be inducted to the process, and training is provided for the individual elements, such as how to correctly install the insulation.

Working in an existing house also poses technical challenges. “Everything’s got to be taken out the front door. It’s much more labour-intensive,” explains AJ Eaton, director at Mi-space.

Enerphit increases some costs by 50%, according to the contractor, without getting more specific.

Once complete, future residents will need to learn how to live differently in the house – for example, pinning a noticeboard to the wall could compromise the airtight seal. Being a shared house, with a predicted high turnover, East Devon Council is preparing now how it will communicate these details to future tenants for years to come.

The council will also use energy bills to track if the house is saving as much energy as is expected.

This story originally appeared in Inside Housing on 15 April 2016

← The Times follow up
Small and beautiful (Inside Housing) →